listen)) is a city in Chittoor district of the Indian state of Andhra Pradesh. It is a municipal corporation and the headquarters of Tirupati (urban) mandal, and of the Tirupati revenue division.[6] As of 2011census, it had a population of 374,260, making it the ninth most populous city in Andhra Pradesh.[7] It is the seventh most urban agglomerated city in the state, with a population of 459,985.[4] Tirupati is considered one of the holiest Hindu pilgrimage sites because of Tirumala Venkateswara Temple, besides other historical temples, and is referred to as the "Spiritual Capital of Andhra Pradesh".[8] Tirupati is also home to many educational institutions and universities. For the year 2012–13, India's Ministry of Tourism named Tirupati as the "Best Heritage City".[9] Tirupati has been selected as one of the hundred Indian cities to be developed as a smart cityunder Smart Cities Mission by Government of India.

Tirumala (Upper Tirupati) This town was an established centre of Vaishnavism around the 5th century A.D. during which it was praised by Alvars. The temple rites were formalised by the Vaishnavite saint Ramanujacharyain the 11th century CE.[citation needed] Tirupati survived the Muslim invasions. During the early 1300s Muslim invasion of South India, the deity of Sri Ranganathaswamy Temple, Srirangam was brought to Tirupati for safekeeping. The temple town for most of the medieval era part of Vijayanagara Empire till 17th century and its rulers contributed considerable resources and wealth notable by Krishna Deva Raya and Achyuta Deva Raya, Sadasiva Raya and Tirumala Deva Raya.

The temple was built and upgraded in parts by various kingdoms. The inscriptions in the temple were found in Sanskrit, Telugu, Tamil and Kannada languages [15][16] which specify the contributions of the Pallava Kingdom around the 9th century AD, Chola Kingdomaround the 10th century AD and the Vijayanagara Empire in the 14th century AD.[17] During the 15th century, Sri Tallapaka Annamacharya sung many songs in praise of the holy town in Telugu. He compared it to be divine, including the rocks, streams, trees, animals, and adds that it is heaven on the earth. One example of such a song is=>[18]

In 1932, Tirumala Venkateswara Temple was handed over to Tirumala Tirupati Devasthanams by the TTD Act of 1932. In 2006, Tirupati Urban Development Authority (TUDA) and TTD together conducted "Tirupati Utsavam" which focused on the history of development of Tirupati town, kings who visited Tirumala and their contribution for development of the temple.[19] The fourth World Telugu Conference, a conference for furtherance of Telugu language, was conducted at Tirupati during December, 2012 for three days.[20] In January, 2017, the 104th Indian Science Congress (ISCA) meeting was held in Tirupati.[citation needed]

Tirupati is located at 13.65°N 79.42°E in the Chittoor District of South Indian State of Andhra Pradesh. It lies at the foot of Seshachalam Hills of Eastern Ghats which were formed during Precambrian era.[21] One of its suburbs Tirumala, which is the home to Sri Venkateswara Temple, is also located within the hills.[21] Tirupati Urban agglomeration includes Tirupati (City) and census towns Akkarampalle, Avilala, Cherlopalle, Mangalam, Perur, Settipalle, Thummala gunta (part), Timminaidupalle, Tiruchanur, Tirupati (NMA).[22] Tirupati is surrounded by Srikalahasti towards the East, Puttur towards the South, Poothalapattu towards the west and the Seshachalam hills towards the North.[citation needed] Swarnamukhi River originates in Chandragiri Hills and passes through the Tirupati City before reaching Srikalahasti in the East.[21] 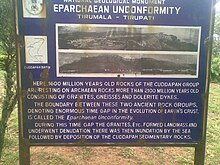 A board in Tirumala hills briefing details of Eparchaean Unconformity