Kadapa (alternatively spelled Cuddapah) is a city in the Rayalseema region of the south-central part of Andhra Pradesh, India . It is the district headquarters of Kadapa district. As of 2011 Census of India, the city had a population of 344,078. It is located 8 kilometres (5.0 mi) south of the Penna River. The city is surrounded on three sides by the Nallamala and Palkonda Hills lying on the tectonic landscape between the Eastern and Western ghats. Black and Red ferrous soils occupy the region. The city is nicknamed "Gadapa" ('threshold') since it is the gateway from the west to the sacred hills of Tirumala.

Kadapa has been under different rulers in its history, including the Nizams and Cholas, the Vijayanagara Empire and Kingdom of Mysore.

The logo of Kadapa Municipal Corporation.

The Kadapa Municipal Corporation oversees the civic needs of the city and was constituted in the year 2005. It has 50 municipal wards represented by a corporator through direct election, who in turn elects the Mayor.[16] The District court is located in the city itself.

The city has rich culture and heritage with the influence of different dynasties. There are different rituals, customs and traditions with the existence of different religions such as, Hinduism, Islam, Christianity, Buddhism and Jainism. The city is known for its historic Devuni Kadapa and Ameen Peer Dargah.

Shilparamam is a crafts village situated in the outskirts of Kadapa.[17]

Kadapa is well known for its spicy and culinary food which is very similar to the South Indian food. Karam dosa is one of the most favourite item of kadapa citizens. People have Dosa, idly, sambar and chutney in their breakfast. Rice, daal and curry is usually served as lunch. Most of the restaurants serve South Indian thali including these dishes in their lunch and dinner menu. Although it has a South Indian touch in its dishes it also has a diverse variety of its own which include Ragi Sangati or Ragi Mudda, Boti Curry, Natukodi Chicken, Paya Curry etc. Ragi sangati with chicken curry is the staple food in Kadapa and is also one of the most famous dishes in the city. Many other varieties of dishes can also be found in the local restaurants. Like many other cities of India fast food is also increasing its reach in the city.[18] 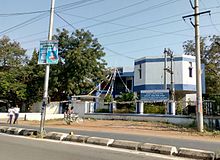 The economy of city is largely based on Agriculture and Mining. Being a district headquarters all types of Government departments are situated within the city. For most of the families the source of income is through the Government jobs and Private sector jobs in various departments including Bussuiness Shops, Hospitality industry, Marketing . Apart from these Tourism also forms a part of economy to the city. Kadapa is one of the 49 metropolitan clusters selected by McKinsey & Company as growth hotspots in India.[19]

The primary and secondary school education is imparted by government, aided and private schools of the School Education Department of the state.[20][21]

Kadapa City is well connected by Road, Rail and Air.

Kadapa has good road connectivity to the other major places like Hyderabad, Bangalore, Chennai and Vijayawada. APSRTC provides bus services to various destinations of the Kadapa district and other cities across South India. The city has a total road length of 803.84 km.[22] 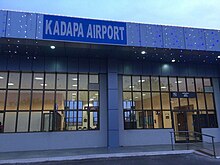 Kadapa Airport was opened for air traffic on 7 June 2015. Its located at a distance of 12 km north west of the City.